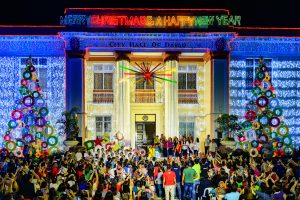 The City Government of Davao on Monday proclaimed the top 3 winners of the Hulagway Sa Pasko 2016 photo contest.

Three judges picked the three winners out of 74 entries based on the following perspectives: journalism, photography and tourism.

Ian Russel Requiso’s Paskong Dabawenyo was adjudged the top winner not only because it is “catchy and relevant,” but also because it depicted Dabawenyos looking forward to the city’s way of welcoming Christmas. Requiso will get a cash prize of P15,000.

Another Requiso work, silhouette of children backdropped by the lighted city hall, was also Mayor’s Choice and earned him an additional P3,000.

Kim Onin was second prize winner with his entry, Smiles of a Bright Christmas, and will get P10,0000. Onin’s piece showed children having fun in front of the city hall.

The third major prize of P5,000 will go to Kinneth Bendijo for his piece, which showed how the city welcomes Christmas Day and New Year’s without firecrackers — through torotot.

The judges also picked 17 entries as runners-up and their authors will get P1,500 each.
The winners will be officially notified through text message and/or email on when and how to claim their prizes.