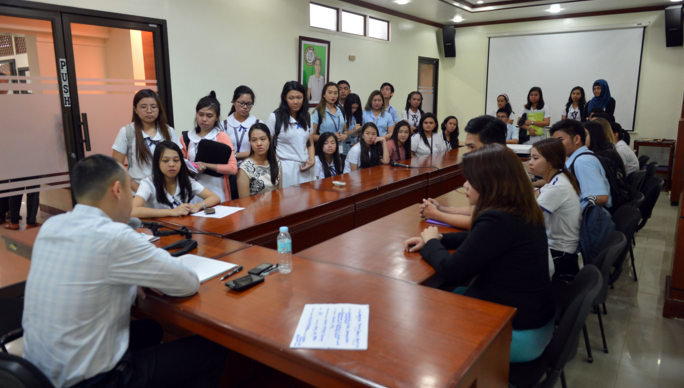 Hundreds of college students from different schools and universities in Davao City have signified their interest to volunteer as liaison officers for the upcoming Asean events to be held in the city next year.

Asean stands for Association of Southeast Asian Nations. The regional bloc will be headed by the Philippines in 2017 — with meetings and other related events to be held in major cities like Davao.

The screening conducted by the City Hall Tuesday attracted hundreds of students from the top colleges and universities, but the organizers will only select 50.

Princess Kan Chua, president of the Ateneo Internation Studies Students Organization (AISSO), noted that to be admitted as one of the liaison volunteers for Asean is a good training.

“These events will be a very good exposure for us,” she said. “These will prepare us for the years to come, especially when we are already out practicing our professions.”

Most of the students who showed up were taking Mass Communications, AB English Language, Political Science, and International Studies.

Successful volunteers will go through a trained to be administered by the National Organizing Council (NOC) for the Asean meetings scheduled in January, February, and July.

The volunteers will also serve during the BIMP-Eaga activity in April. BIMP-Eaga stands for Brunei Darussalam-Indonesia-Malaysia-Philippines East Asean Growth Area.

“We have already picked around 20 volunteers during Tuesday’s screening,” said Assistant City Administrator Tristan Dwight Domingo. “We are still inviting those interested to come for an interview.”

“Certainly, we’re going to choose the very best as they will be the city’s frontliners — acting as liaison officers for high-level delegates,” Domingo said. CIO