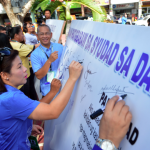 Employees of the local government of Davao pledged their 100 percent support for the fight against terrorism, a declaration highlighted by a signing of a manifesto and the wearing of anti-terror pins. The signing of the manifesto, which was led by heads of the departments and offices of the City Hall on Monday, also marked continue reading : City Hall employees pledge support for fight against terrorism 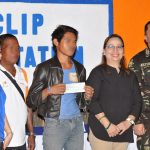 Davao City Mayor Inday Sara Duterte was thankful for the surrender of 35 cadres of the New People’s Army (NPA) recently. In a ceremony last week, the mayor said the surrender was a proof that there is life outside the armed revolution of the NPA. This, she said, was the reason why the city government continue reading : Mayor Sara enjoins former rebels to support government 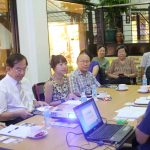 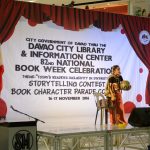 In the face of exciting and rapidly changing technology that takes the interest of children these days, the Davao City Library has organized a storytelling contest among public and private schools in the city. Pedrita Badar, the chief of the Davao City Library, said the objective of the contest was to stimulate the interest of continue reading : Storytelling stimulates children’s interest in reading books Davao City is eyeing to establish permanent traffic inspection stations at its borders as part of the city’s counterterrorism measures. Mayor Inday Sara Duterte made this announcement during the recent City Peace and Order Council (CPOC) meeting attended by top officials of the police and military and representatives of the business sector and other groups. continue reading : Permanent inspection stations to replace checkpoints in Davao 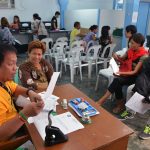 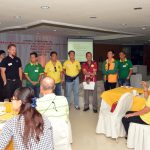 A team of consultants consisting of tourism planners and heritage specialists are here in the city set to craft a master plan creating a tourism traffic for Barangay Mintal. Pre-war Mintal was considered as Davao City’s Little Tokyo, where the Japanese have settled and built infrastructures like hospital, schools and cemetery. Relics from the Japanese continue reading : LITTLE TOKYO OF DAVAO Experts consult locals as crafting of tourism masterplan kicks off 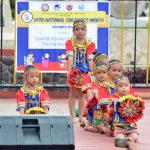 A group of Moro children joined the celebration of Children’s Month in Davao City. On Monday, members of the Batang Astig Moro participated in various activities lined up by the local government of Davao for the celebration. The City Social Services and Development Office (CSSDO) spearheaded the Monday kick off at the Rizal Park. Hundreds continue reading : Moro kids join Davao Children’s Month celebration